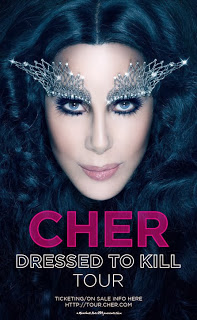 At least she’s not calling this one another “farewell tour.”

Cher is ready to hit the road on the “Dressed to Kill” tour, her first trek in eight years. The legendary performer made the announcement Monday morning on NBC’s “Today” show, telling the hosts that it won’t be easy. “The road is horrible, but the concerts are great,” she told Matt Lauer and Savannah Guthrie. “I understand why guys in bands tear up hotel rooms and throw TVs out the windows, because it’s a very lonely place. The only time you have fun is at the concerts.” The tour will visit 49 cities across North America starting March 22 in Phoenix and will include stops in major markets including Washington D.C., Philadelphia, NYC (Brooklyn and East Rutherford, NJ), Seattle and Los Angeles before wrapping up July 11 in San Diego.

Previous Starbucks’ Gun Policy Is Like Being Asked To Check Your Gayness At The Door
Next TRAILER: Don Hemingway