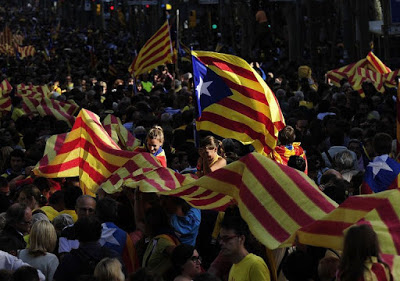 The human chain was planned on a traditional regional holiday that last year saw more than one million people come out in protest in Barcelona, the largest show of separatist sentiment since the 1970s. The chain, named the Catalan Way, was due to link 86 towns and villages along the coast to push for a referendum on political self-determination for Catalonia in 2014. Catalonia is a wealthy industrial region in northeastern Spain that accounts for a fifth of the country’s economic output. The protest aims to generate international media coverage of the referendum drive, which is resisted by the central government in Madrid. Artur Mas, Catalonia’s regional leader, has promised to hold an independence referendum in 2014, but has been unable to get the Spanish government’s approval.

VIDEO: Ex-pats and supporters in San Francisco created their own human chain too.

Previous Scott Lively: How Russia Can Beat The Gays At The Sochi Olympics
Next Broadway Flea Market: September 22nd