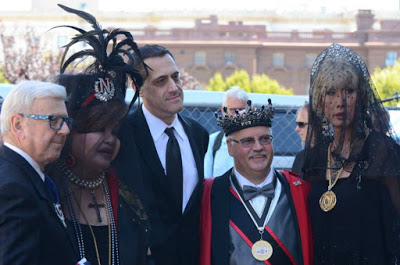 The funeral for Jose Julio Sarria, also known as the Widow Norton, was held yesterday at San Francisco’s Grace Cathedral.  Sarria, who was the first openly gay person to ever run for public office in the United States, left instructions for his service:

More photos from yesterday’s service can be found at the Facebook page of photographer Steven Underhill. Sarria was buried in a plot next to Joshua Norton, the eccentric 19th century miner who declared himself Emperor of San Francisco. (Tipped by JMG reader Eric)

UPDATE: JMG reader Steve points out that the San Francisco Chronicle has posted photos too.