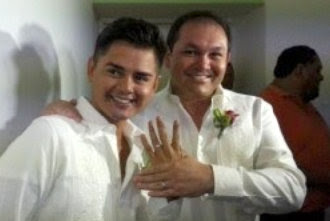 The first same-sex wedding in the Mexican state of Yucatan was held yesterday. Translated from El Diario:

The spouses are Javier Alberto Carrillo Esquivel and Ricardo Arturo Góngora, who last month won a federal injunction allowing them to get married. The gay wedding was hosted at the disco Blu Namu and was attended by 400 guests,  The couple, who wore white guayaberas, gave a press conference before the ceremony. In March, the two young men, a couple for four years, brought the legal challenge to the provision of the Civil Registry.