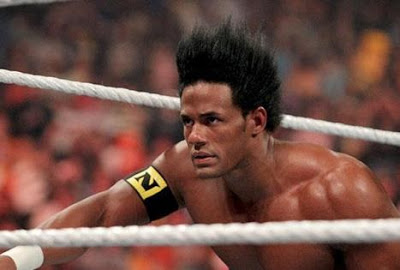 I almost put a question mark in the headline because with pro wrestling, you never know. Here’s what TMZ says:

WWE superstar Darren Young just dropped a bombshell, telling TMZ, he’s gay … and no, this isn’t part of the act. Darren was at LAX Wednesday when we asked whether a gay wrestler could succeed in WWE, and Darren laughed, saying, “Absolutely. Look at me. I’m a WWE superstar and to be honest with you, I’ll tell you right now, I’m gay. And I’m happy. I’m very happy.” For the record, Darren is now the first openly gay wrestler ever at WWE … and the first headlining wrestler ever to come out while still signed to a major promotion. Other pro wrestlers have been rumored to be gay, but that’s it … just rumors. Bottom line: this is big, big news. For all its chauvinism and testosterone-driven bravado, coming out in WWE is tantamount to coming out in the NFL.

The news is initially jarring, but perhaps it shouldn’t be in this day and age with tolerance at an all-time high for alternative lifestyles. Perhaps even more surprising than Young’s announcement was the nonchalant manner in which he made it. There were no bells and whistles involved as Young didn’t call for a news conference or anything of that nature. TMZ is infamous for its ambush interview style, and it appears as though Young’s interview was no different. It seemed like a spontaneous decision on Young’s part, and he should be commended for it.