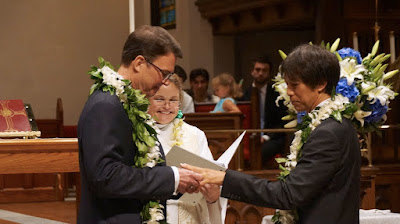 US Ambassador To Australia John Berry Marries In Washington DC

John Berry and Curtis Yee, partners of 17 years, were formally married on Saturday August 10, at St. Margaret’s Episcopal Church in Washington DC. Music was provided by Dr. Theodore Guerrant and soloist, Christian Hoff. The wedding was attended by family and close friends, including the Secretary Of the Department of Interior, who then celebrated after the service at the home of Mr. Yee and Mr. Berry.

It’s a happy time when any couple marries and I congratulate John Berry and Curtis Lee on their special day and wish them well for their married life together. Sadly, they join hundreds of other same-sex couples whose overseas same-sex marriages aren’t recognised under Australian law. It will be a source of deep embarrassment for many Australians that our law fails to respect the marriage of the chief representative of our closest friend and ally, the United States. Kevin Rudd’s commitment is a reminder not just that marriage equality is important, but that it is urgent. This increases pressure on Tony Abbott to commit to a conscience vote so marriage equality can finally be passed. This election provides voters with the opportunity to vote for love, by electing candidates who support marriage equality.