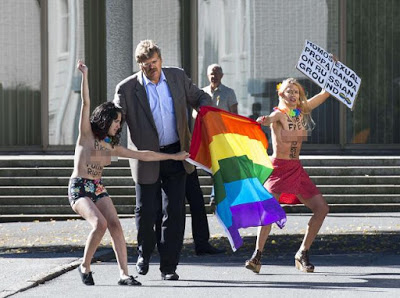 Two of Ukraine’s famed FEMEN topless activists climbed a fence yesterday and rushed into Russia’s embassy in Stockholm in a protest over LGBT rights.

The two women, linked to the Ukrainian feminist group Femen, waved a rainbow flag at the embassy’s grounds and carried a sign saying “homosexual propaganda on Russian ground.” They were supported by two other activists outside the embassy, who shouted “Gay Rights are Human Rights.” The activities coincide with Stockholm Pride festival, which is being held this week and which has put special focus on gay rights in Russia. Earlier this week, Sweden’s Foreign Minister Carl Bildt also reacted to the deteriorating situation for gay, lesbian, bisexual and transgender people in Russia. “Hate-mongering against LGBT persons on the rise in Russia after recent law,” he wrote on Twitter. “Repulsive. Inhuman.”

Also protesting outside the embassy was a crowd of more than two hundred Swedes.