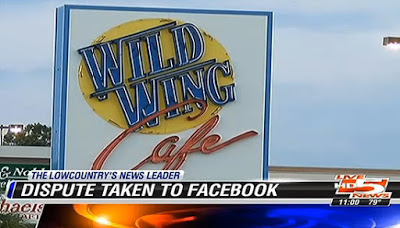 After the wedding photography ruling in New Mexico last week, anti-gay and Christian groups predictably screamed about the (mythical) right of businesses to refuse service to anyone. Raw Story reports on a South Carolina restaurant exercising that “right”:

A group of customers at a Wild Wing restaurant in Charleston, SC were forced to wait two hours for their table and then were ultimately denied service on the basis of their race. According to Charleston’s WNEW Channel 5, the group of 25 African-Americans were asked to leave because a white customer felt “threatened.” Michael Brown and a group composed of family and friends were gathered in July at the North Charleston Wild Wing Café to say farewell to a cousin who was moving away. The party waited for two hours for a table only to be told by a manager that there was “a situation.”

After calls to the chain’s corporate office were ignored, Brown took his complaint to Facebook, where the company finally took notice and offered the group a free meal. That offer was rejected.

RELATED: It’s worth pointing out that it would have been perfectly legal for that South Carolina restaurant to turn away gay customers. Only 21 states (and Washington DC) have public accommodation laws that include protections based on sexual orientation.