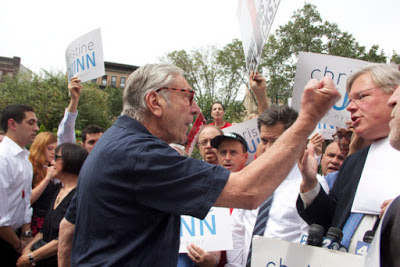 A mayoral campaign press conference for New York City Council Speaker Christine Quinn turned violent yesterday when an anti-Quinn protester slapped openly gay state Sen. Brad Hoylman in the face. The protester, seen above shaking his fist at openly gay former state Sen. Tom Duane, said that he blames Quinn for the closure of St. Vincent’s Hospital in the West Village, forcing him to travel ninety minutes to the Bronx to visit his wife, who he said died in a hospital there on Saturday.

Ironically, Hoylman and Duane, both Quinn supporters, were at the press conference to back Quinn’s claim that rival mayoral candidate and Public Advocate Bill de Blasio “had done nothing” to prevent St. Vincent’s closure. But also there was the usual contingent of anti-Quinn activists that have dogged her every public appearance for years.  Politicker has more on the fracas:

“Shame, shame, shame on you,” the group chanted as the press conference was set to begin, drowning out Ms. Quinn’s supporters. As the press conference continued, the voices grew louder, with the protesters proclaiming that Ms. Quinn–who was not present at the event–had “blood on her hands.” At one point, George Capsis, reportedly the publisher of the WestView News, who is known for causing scenes at local meetings, leapt in front of Mr. Duane, screaming: “You’re a fatuous idiot!” as he shook his fist.

The situation grew more intense as spokespeople for Ms. Quinn’s campaign attempted to get the man to leave. Instead, Mr. Capsis struck Mr. Hoylman in the face as he made his way out through the crowd. After rejoining the protesters, Mr. Capsis hit another Quinn supporter in the face, prompting the supporter–an intern–to leave the scene in tears. Later, Mr. Capsis tried to explained why he’d hit Mr. Hoylman. “He’s a vacuous idiot. He never supported saving the hospital,” Mr. Capsis charged.

Politicker notes that Capsis was charged with slapping a police officer last year.  No charges have apparently been filed for his assaults on Hoylman or the Quinn staffer. The Quinn campaign says they did file a police report, but the NYPD says it has no record of such. The New York Daily News adds that a member of the anti-Quinn group also taunted Duane, a recovering alcoholic, by shouting, “Have another drink, Tom!”

The anti-Quinn group, Anybody But Quinn, which has blanketed local television with ads all summer long, issued a statement lauding its members for “unleashing a bold counter-protest” at the press conference but made no mention of the assaults. It is unclear if Capsis is a member of the group.

Previous GOP: We Need More Women To Run
Next HAWAII: Next For Marriage?