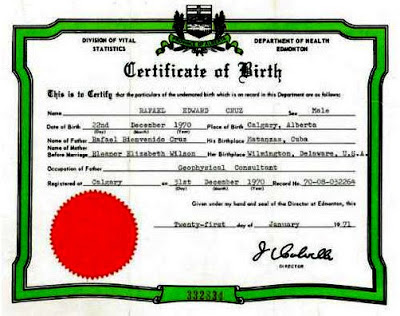 The birthers are tying themselves into knots defending Tea Party hero Sen. Ted Cruz, who has released his Canadian birth certificate to the Dallas Morning News.

Born in Canada to an American mother, Ted Cruz became an instant U.S. citizen. But under Canadian law, he also became a citizen of that country the moment he was born. Unless the Texas Republican senator formally renounces that citizenship, he will remain a citizen of both countries, legal experts say. That means he could assert the right to vote in Canada or even run for Parliament. On a lunch break from the U.S. Senate, he could head to the nearby embassy — the one flying a bright red maple leaf flag — pull out his Calgary, Alberta, birth certificate and obtain a passport. “He’s a Canadian,” said Toronto lawyer Stephen Green, past chairman of the Canadian Bar Association’s Citizenship and Immigration Section. The circumstances of Cruz’s birth have fueled a simmering debate over his eligibility to run for president. Knowingly or not, dual citizenship is an apparent if inconvenient truth for the tea party firebrand, who shows every sign he’s angling for the White House.

The US Constitution makes no mention about the eligibility of dual citizens to be president. Cruz can easily renounce his Canadian citizenship by appearing before a judge and paying a $100 filing fee.