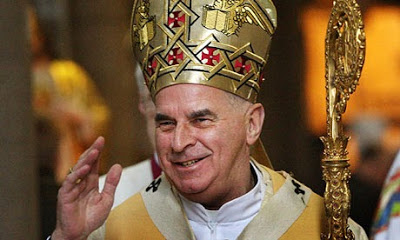 Back in February, Cardinal Keith O’Brien resigned two days after four priests accused him of “inappropriate contact” with them while they were seminary students in the 1980s. O’Brien later issued a murky confession about behavior “below the standards expected of me as a priest, archbishop and cardinal.” Today we learn that O’Brien halted an inquiry into sexual abuses by other priests over a year before he resigned.

The Bishops’ Conference of Scotland commissioned a report into allegations of abuse in 2011 but it was halted the following year when Cardinal O’Brien, then president of the conference, withdrew his support. His opposition to an inquiry into Church-related abuse allegations was revealed by the retired archbishop of Glasgow, Mario Conti, in a letter to the Catholic newspaper The Tablet. Mr Conti wrote: “It was the intention of all but one member of the Bishops’ Conference to commission an independent examination of the historical cases we had on file in all of our respective dioceses and publish the results, but this was delayed by the objection of the then president of the conference; without full participation of all the dioceses the exercise would have been faulty.”

RELATED: After O’Brien’s resigned, one of his accusers, a former priest, revealed that he had been O’Brien’s long-term boyfriend and had outed him because he was angry about O’Brien’s opposition to same-sex marriage.