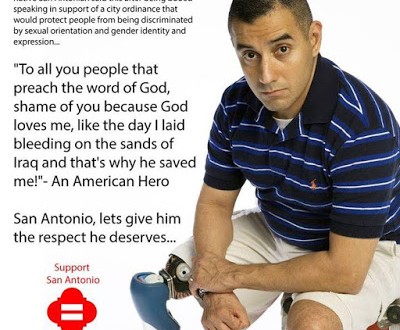 Openly gay USMC veteran Eric Alva was the first American soldier injured in the Iraq War and anti-gay Christian protesters actually booed him when he spoke yesterday in support of San Antonio’s proposed LGBT rights ordinance. Via the Dallas Voice:

At a prayer vigil outside City Hall before the meeting, about 300 people protested the proposed addition to San Antonio’s nondiscrimination law that would add protections for sexual orientation, gender identity and veteran status. “Let them vote ‘no’ to this ordinance, and ‘yes’ to the reign of the kingdom of God,” Pastor Charles Flowers said at the rally. About 200 people signed up to speak at the City Council meeting for and against the ordinance. Alva, a Marine staff sergeant who became the first U.S. soldier injured in Iraq when he stepped on a landmine, was booed by the crowd when he spoke in favor of the ordinance. Alva lives in San Antonio.