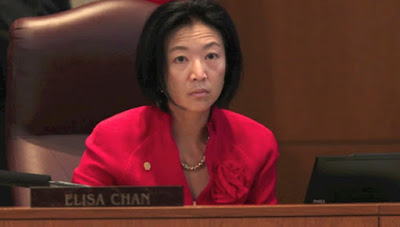 From the My San Antonio news site:

“So disgusting!” That exclamation escaped the lips of District 9 Councilwoman Elisa Chan on May 21 in her City Hall office, where she was meeting with members of her staff to discuss the city’s proposal to update its nondiscrimination ordinance, adding protections for sexual orientation and gender identity. In the course of the conversation, Chan expressed her unvarnished views on homosexuality, which range from befuddled to intolerant. She revealed that she believes being gay is a choice and that gay people should not be allowed to adopt children, and she voiced revulsion toward the LGBT community. Unbeknown to the councilwoman, an aide, James Stevens, was secretly recording the meeting on his iPhone. (He’s now a former aide; Stevens, 28, quit this week.)

The most disgusting comments come from Chan’s former chief of policy, Jeff Bazan, who backpedaled furiously today: “I was basically explaining the viewpoint that some people have on the gay marriage issue. What I said was wrong and I deeply regret it.”

UPDATE: I’ve removed the audio player posted here as it was borking the template. I recommend you click over to Gawker and listen to the clip, if you can bear it.

Previous HomoQuotable – Thomas Roberts
Next Religion’s Gifts To The World