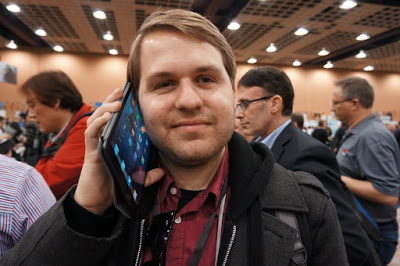 The 6.3-inch phablet will be available via AT&T, Sprint, and US Cellular in Nova Black or Polaris White, Samsung announced today. AT&T said it will start selling the Mega on Aug. 23 for $149.99 with a two-year contract or $24 per month for those with its early upgrade AT&T Next program. Sprint said it will offer the smartphone “later this year,” and US Cellular has not yet revealed launch information. Samsung first unveiled the Mega in April, though it was unclear at the time whether it would ever be sold in the U.S. But it will now arrive stateside, with many of the features found on the Korean phone maker’s Galaxy lineup.

But will it fit into your back pocket?

Previous NEW YORK: Legislators Renew Push For Ban On “Ex-Gay” Therapy For Minors
Next Quote Of The Day – George Takei