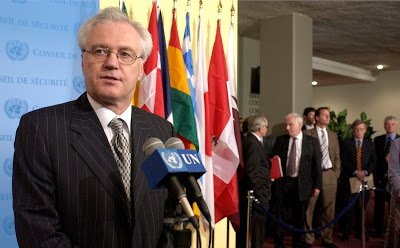 Yesterday activists confronted the Russian ambassador to the United Nations outside of his home in Manhattan.

Ambassador Vitaly Churkin arrived at his residence on New York’s Upper East Side in the late afternoon to find 10 activists from the international gay rights group All Out outside the wrought iron gates holding red placards saying: “340,457 worldwide say stop Russia’s anti-gay crackdown.” Minutes earlier, when they got no answer ringing the bell, they had slipped a CD with the signatures under the gate. Churkin picked up the CD and told the activists they should go through proper channels and deliver the petition to Russia’s U.N. Mission.

But he stopped for about 10 minutes to engage All Out’s co-founder and executive director Andre Banks and insist: “We don’t have anti-gay laws. We have laws banning homosexual propaganda among minors.” Banks countered that the word “propaganda” hasn’t been defined and gay people in Russia have been killed and arrested. “That’s not true,” Churkin retorted. “No gay people have been killed or harmed because they’re gay,” and if that were proven it would violate Russia’s constitution which guarantees equality to everybody “no matter what.”