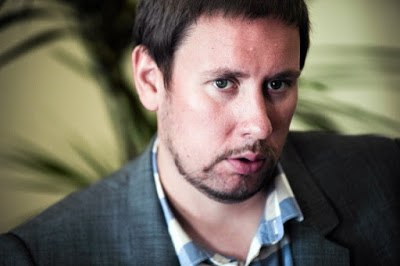 Finnish Minister of Culture & Sports Paavo Arhinmäki waved a rainbow flag this afternoon during the World Track & Field Championships in Moscow.  The above-linked article is in Finnish. I’ll update this post with an English report if it appears that action will be taken by the Russian government.

RELATED:  Arhinmäki ran for president of Finland in 2012 and finished sixth with 5% of the vote.  Here’s how a Finnish website recapped his candidacy before the election.

Arhinmäki, 34, is the youngest and the most radical of the candidates. Before entering politics, he was active in a radical group which organised Crash the Party demonstrations in front of the Presidential Palace, packed with VIPs celebrating Independence Day. He has been fined for trespassing in a nuclear power site and when the Asia-Europe Meeting (ASEM) was held in Helsinki he was arrested during the Smash ASEM demonstration. Arhinmäki is Minister for Culture and Sports in the present six-pack government, a six-party coalition, and he chairs the Left Alliance. A sports fan, he caused a minor scandal in autumn 2011 by attending a basketball game instead of the Helsinki Music Centre opening gala. Arhinmäki boasts of being the most anti-NATO candidate of the race and argues the rest of the candidates are in fact pro-NATO. He is known for good oratory and for being a vegetarian. He describes himself as “a green-red democratic socialist”, but not a communist.