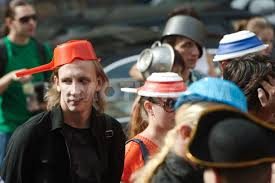 Eight followers of the Flying Spaghetti Monster were arrested for marching without a permit in Moscow yesterday after members of the Russian Orthodox Church attacked them during a mock religious rally.

Followers of the Church of the Flying Spaghetti Monster planned to hold a “pasta procession” in Moscow and St. Petersburg to honor the birthday of Robert De Niro, who once played a character named Noodle in the movie Once Upon A Time in America. The “pasta procession” in Moscow was disrupted by the Orthodox activist group Bozhaya Volya, or God’s Will, who sprayed ketchup on a march participants. The Orthodox group has held demonstrations against homosexuality, the punk rock group Pussy Riot, and the Darwin natural history museum. Moscow police dispersed the marchers, claiming the procession was not sanctioned by authorities. “We were detained for simply walking,” one Pastafarian wrote on a social networking website. “In particular, I was taken in for a sieve on my head.”

On June 30th, the same day that Vladimir Putin signed the bill against “homosexual propaganda,” he signed into law a bill which makes it a crime to “insult the religious sensitivities of believers.” That law has received much less attention.