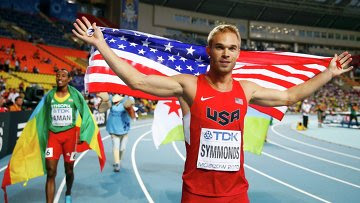 American runner Nick Symmonds yesterday won the silver medal in the 800-meter race at the World Track & Field Championships in Moscow. Speaking to the press afterwards, dedicated his win to his gay friends at home in the United States.

“As much as I can speak out about it, I believe that all humans deserve equality as however God made them,” he told R-Sport after running a 1:43.55 at Moscow’s Luzhniki Stadium. “Whether you’re gay, straight, black, white, we all deserve the same rights. If there’s anything I can do to champion the cause and further it, I will, shy of getting arrested.” Symmonds, 29, made his opposition to a new law banning the promotion of homosexuality to minors known in a blog post for Runner’s World magazine on August 6. Despite his outspokenness in the United States, he said he would he would not bring up the subject in Russia out of respect for the host country’s laws. “I respect Russians’ ability to govern their people,” he said Tuesday. “I disagree with their laws. I do have respect for this nation. I disagree with their rules.”

The Russian state news agency RIA Novosti noted that Symmonds is the first athlete to criticize Russia’s anti-gay law while on that nation’s soil. Several news reports speculate whether Symmonds words, as careful as they were, do put him at risk of being arrested.