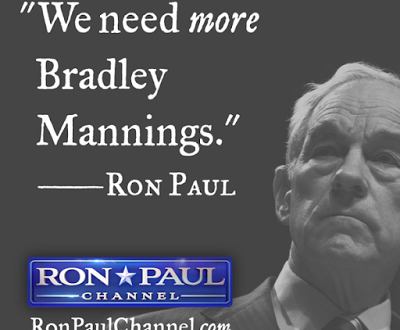 The screaming across Teabagistan this morning is really something.  And the senior Paul’s position is miles away from his son’s.

“There do have to be laws to protect some secrets. I think if you’ve got the, you know, the plans on how to make a nuclear bomb that is a state secret. If you give that to the enemy, that is being treasonous,” said the Senator from Kentucky, “Even if you reveal it, you just have to have laws against that. What Manning did was just willy-nilly, just released millions of pages of things and I think some people have said there is potentially some harm from that. You know individual agents that could have been killed or put at risk from this. So there is a problem with that. So I just can’t support that.”

Previous Quote Of The Day – Bill Donohue
Next DENMARK: 10,000 March In Copenhagen In Protest Against Russia’s Anti-Gay Laws