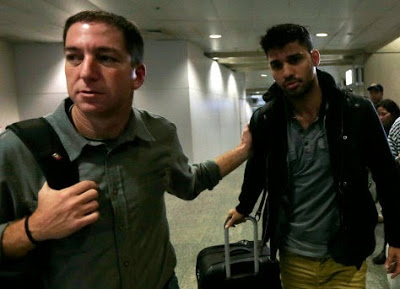 David Miranda, the partner of journalist Glenn Greenwald, was carrying 58,000 classified intelligence documents when he was detained by British authorities earlier this month, according to a new UK national security report. Miranda was detained for nine hours at London’s Heathrow airport, a move that Greenwald called “a profound attack on press freedoms and the news gathering process.” But today’s 13-page report, from UK deputy national security adviser Oliver Robbins, has reinforced Greenwald’s critics, who believe he and his partner are hiding behind claims of journalistic freedom while disobeying the law.

Scotland Yard has launched a criminal investigation against Miranda.  Greenwald is quoted today by the Telegraph:

“The UK Government is incapable of pointing to a single story we have published that has even arguably harmed national security. The only thing that has been harmed are the political interests and reputations of UK and US officials around the world, as they have been caught engaging in illegal, unconstitutional and truly dangerous bulk surveillance aimed at their own citizens and people around the world, all with little accountability or transparency – until now.”

Previous She Totally Forgot
Next Fischer Has The Treasury Dept. Sadz