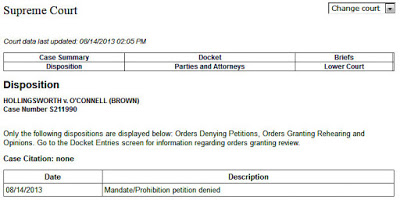 Breaking news out of California:

The California Supreme Court refused Wednesday to revive Proposition 8, ending the last remaining legal challenge to same-sex marriage in the state. Meeting in closed session, the state high court rejected arguments by ProtectMarriage, Proposition 8’s sponsors, that only an appellate court could overturn a statewide law. In its challenge before the state’s highest court, ProtectMarriage argued that a single judge lacked the authority to overturn a state constitutional amendment. The group also contended that Walker’s injunction applied to two counties at most and that state officials had overstepped their authority by ordering county clerks throughout California to issue same-sex marriage licenses. State officials countered that the challenge was a veiled attempt to persuade a state court to interfere with a federal judge’s order in violation of the U.S. Constitution.

And that’s that, folks!