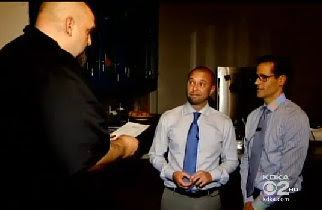 Last night the mayor of a small Pennsylvania suburb of Pittsburgh married two men in the first such ceremony in Allegheny County.

John Kandray and Bill Gray of Regent Square have been together for 11 years. They share a house, two dogs and what they say is a deep love for each other. “Showing our commitment to each other,” Gray said, “which we’ve been at that point for a long time, just now we can prove it.” When they heard that Montgomery County was issuing licenses to same-sex couples, they went across the state to get one. And then they heard Braddock Mayor John Fetterman was willing to marry them. So at the mayor’s home and in front of the couple’s family and friends, they exchanged rings and were married by the mayor.

Previous HomoQuotable – Frank Bruni
Next Cookie Monster – Me Want It