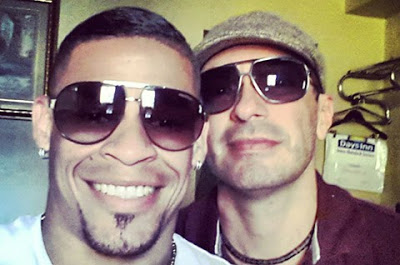 Out Boxer Orlando Cruz Gets Engaged

USA Today has the news:

Featherweight Orlando Cruz made headlines last October when he announced he was gay. By making the announcement, in which he declared himself a “proud gay man,” he became the first openly gay male professional boxer. Cruz also grabbed the public’s attention this week, or at least the attention of his followers on Facebook, when he proposed to his longtime boyfriend José Manuel with a video message posted to the social media site. Cruz will fight for the vacant WBO featherweight world title on October 12 against Orlando Salido in Las Vegas. Manuel responded to the video with a heartfelt video of his own, in which he accepted the proposal.

Cruz’ boxing nickname is The Phenomenon. (Via Towleroad)