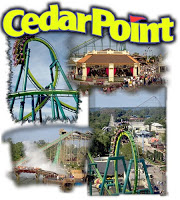 Via the Columbus Dispatch:

An amusement park here is canceling a wedding contest after a gay couple organized a protest against the promotion. Cedar Point amusement park initially limited the contest to heterosexual couples because it said state law doesn’t allow gay couples to legally marry in Ohio. A spokesman says the park decided to cancel the event once it started to take on political undertones. The amusement park that sits along Lake Erie in Sandusky had planned to select 13 couples to get married there on Friday the 13th in September.

Stand by for the screams about homofascism.

Previous Cruz To Renounce Canadian Citizenship
Next TAIWAN: 53% Back Marriage