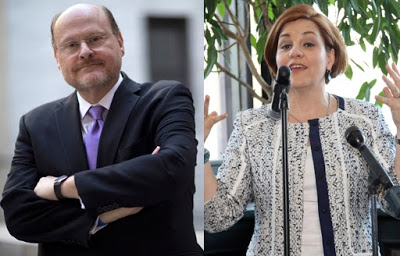 The New York Times editorial board has endorsed both Christine Quinn and Joe Lhota for mayor. Republican front-runner Lhota is the former head of the MTA.

We had already made up our own minds in favor of Ms. Quinn, but the Wednesday debate would have clinched it anyway. Candidates were asked what legacy they wanted to leave after two terms. “More people in the middle class,” Ms. Quinn said. It was a perfect answer, and she could have left it there. But, Quinn being Quinn, she threw in supporting details. She wants 40,000 more apartments the middle class can afford to live in. She wants to repair crumbling public housing, providing “quality conditions” for 600,000 people. She wants to make the school day longer and replace textbooks with electronic tablets. At the buzzer, she threw in: make the city “climate-change ready.” A lot of good ideas that, in Ms. Quinn’s case, add up to an achievable vision, and one we would be glad to see come to pass.

Few people know better than Mr. Lhota how city government works. He was an expert budget director for Mr. Giuliani, and then became deputy mayor for operations. In 2011 and 2012, he ran the Metropolitan Transportation Authority, which, under his leadership, recovered amazingly quickly from the damage done by Hurricane Sandy. Mr. Lhota, son of a New York City cop, is not a glad-handing pol, but a practical and efficient one. When The Times’s editorial board interviewed candidates for the mayoral endorsement, it asked them to supply one practical idea to improve the quality of life in New York. Some were flustered. Not Mr. Lhota, who gave an instant, excellent answer: park-and-ride lots at the far ends of subway lines, to coax drivers at the city’s edges onto mass transit.

UPDATE: Queers Against Quinn responds on their Facebook page.

It should not come as a surprise to anyone to see the New York Times endorse Christine Quinn for the Democratic mayoral nomination; it’s exactly what one should expect from a paper that’s nothing but a shill for Bloomberg, Inc.; in fact, the Times all but says that it’s endorsing Quinn in order to carry on Bloomberg’s legacy, following with an almost entirely fictional account of Quinn’s role as Speaker of the City Council. On the same editorial page, the Times endorses Joe Lhota for the Republican nomination, which should give you a clue as to how far to the right the NYT has swung over the course of the last few decades, serving as a cheerleader for Bloomberg’s 12 years of misrule & for the real estate industry of which the Times is a part (few know that the NYT itself holds major real estate interests in the city). Here’s the good news: the NYT’s disgraceful endorsement of the worst candidate in the Democratic field won’t do anything to guarantee Quinn’s election; in fact, there’s quite a record of NYT-endorsed candidates going down to defeat, which every true progressive in this city is hoping will happen to Chris Quinn~!