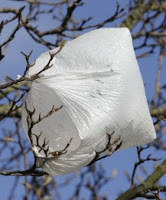 NYC’s Plastic Bag Bill Is Back

Five years ago the NYC Council rejected Mayor Bloomberg’s bill that would tax consumers six cents every time a store gave them a plastic bag. Tomorrow a new version of the bill will be introduced, this time by Council members themselves.

The bill has seven co-sponsors but has yet to earn the support of Christine Quinn, who as Council speaker determines which bills come to the floor for a vote. “The bill will be introduced on Thursday, then referred to the appropriate committee, where it will undergo full legislative review,” said Quinn spokesman Jamie McShane, in an email. Bloomberg’s proposal never went anywhere, but this new legislation differs from Bloomberg’s in a couple of significant ways that might render it more appealing to business owners: Unlike the mayor’s 6-cent proposal, which allocated a penny to the retailer and a nickel to city coffers, this proposal allows business owners to keep the entire 10-cent fee. It also applies to both plastic and paper bags, thereby addressing one complaint that arose back in 2008.

Shockingly, plastic bag manufacturers are opposed to the bill.

The American Progressive Bag Alliance, which represents manufacturers like Hilex Poly and Unistar Plastics, sent over a statement that said, in part: “The proponents of this bill are misinformed and largely rely on science that has been hijacked by environmental activists. A grocery bag tax pushes shoppers toward less sustainable options, like reusable bags, which cannot be recycled, are made from foreign oil and imported at a rate of 500 million annually.”

Restaurants and food delivery companies would be exempt from the bill, but food trucks and carts would not.

Previous Colorado Counties To Vote On Secession
Next NEW YORK: Legislators Renew Push For Ban On “Ex-Gay” Therapy For Minors