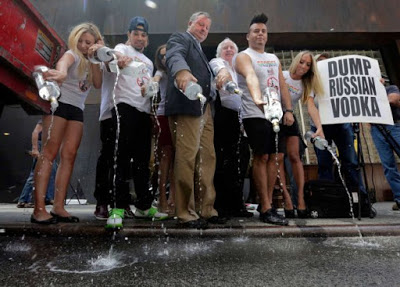 As I mentioned yesterday, a 200-member NYC restaurant and nightclub group has joined the boycott of Russian vodka.  Here’s more on their protest in Manhattan.

Holding up a bottle of the popular Russian brand Stolichnaya, the United Restaurant and Tavern Owners Association President Paul Hurley shook his head and called for a city-wide boycott of Russian spirits and liquor. “All these vodkas here, we’re going to throw them out,” Hurley said. “We feel enough is enough.” Hurley, who urged people to drink American-made alcohol instead, said the boycott was the first step toward pressuring Russia to change its policies toward gay people. Paddy MacCarty, who owns a Manhattan bar called Nevada Smiths, said he’s planning to toss out every bottle of Russian vodka behind the bar. At least 200 New York bars and restaurants are participating in the boycott, which has spread to many gay bars across North America in the wake of a newly passed Russian law that bans the so-called “propaganda of nontraditional sexual relations.”