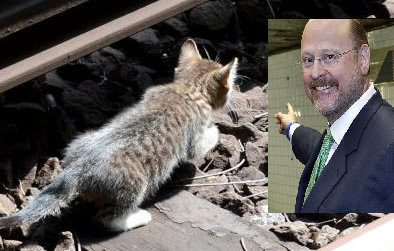 As Gotham continues to be roiled in debate over whether the subway should have been shut down for those two kittens on the tracks, the mayoral candidates have weighed in and only one would have let the trains roll over their little bodies. (Spoiler: It’s the Republican seen above pointing Fluffy to an oncoming B train.) Via New York Magazine:

Republican front-runner Joe Lhota — whose previous job was, in fact, running the MTA — would not have stopped the trains. “No, Joe does not think a train line should be shut down” to save two kitties, a campaign spokesperson tells Daily Intelligencer. This puts Lhota at odds with his chief rival, John Catsimatidis, who points out to Daily Intelligencer in a peculiarly formatted e-mail that you can’t spell Catsimatidis without “cats”: I am an Animal Lover / Especially CATS / Supposed they were Baby Rats / Its up to the Policeman on the Scene to make decision / Not the Mayor.

All of the Democrats who responded via their spokespeople are pro-kitten. Anthony Weiner: “If Anthony is elected mayor, he will not only stop trains for kittens, he will personally crawl over the third rail to do it.” Christine Quinn: “Chris would have stopped the trains for the kitties.” Bill Thompson: “Bill would work to protect the subway kittens in such a situation.” Why does Bill De Blasio remain silent?!?1?

UPDATE: The kittens have been named Arthur and August and will be available for adoption in three days if no owner comes forward. They are believed to be four weeks old.

Previous President Obama: If We Launch Attack On Syria, It Will Be A Limited, Narrow Act
Next IOC Responds To New York’s LGBT Pols