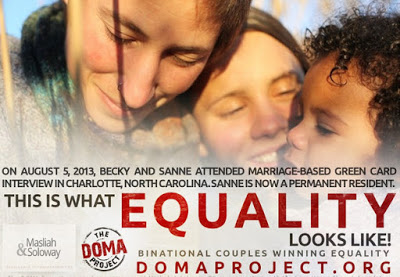 Via the DOMA Project:

Although North Carolina voters passed the infamous anti-gay state constitutional “Amendment 1″ in May 2012 that bars The Tar Heel State from recognizing and performing marriages or civil unions of same-sex couples, Masliah & Soloway clients, Becky and Sanne, who married in the Netherlands, were treated just as any other married couple as they arrived at their green card interview on Monday, August 5th, at 10 a.m. at the USCIS office in Charlotte. The Officer thoroughly reviewed the journey of their relationship which began in India and included time spent in Belgium and the Netherlands as well as Africa. The Officer was satisfied that they had provided sufficient evidence of the bona fides of their marriage and officially re-opened the denied green card application (the Board of Immigration Appeals had already ordered the green card petition to be re-opened) and adjudicated it at the same time.

Read their full story and smile.