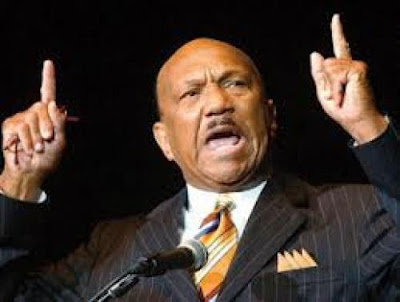 “Since when does America have the right to force its immorality, depravity, and sin on another nation? We are currently witnessing the free fall of our nation. Over the past five years, we’ve moved from a super power position to a nation that is perceived to be weak and contemptible. This overall decline of our nation has proven to be an unequivocal manifestation of a ‘heavenly verdict’ against the nation.

“With the battle for the family waging across this nation, instead of condemning a sovereign nation for its laws we need to be changing ours. The family unit is under attack and we must stand against those who want to redefine and destroy it. The family is the foundation of a society and the glue that holds it together. I applaud the Russians for taking a stand for children! –  NOM spokesperson Rev. Bill Owens, in an email to the Coalition of African-American Pastors.

RELATED: Owens has previously compared homosexuality to bestiality and earlier this year he spoke at NOM’s hilariously unattended “march” on the Supreme Court.

Previous Matt Baume: Marriage News Watch
Next Frothy: There Are No Classes In America