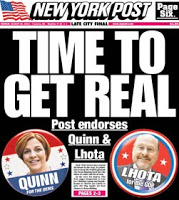 Christine Quinn today earned a newspaper hat trick as the third of New York City’s three biggest dailies joined the New York Times and the New York Daily News in endorsing her. (Like the Times did on Saturday, the Post has also endorsed Republican front-runner Joe Lhota, the former head of the MTA.)  But the Rupert Mudoch-owned Post cannot resist slamming Quinn’s “lurch to the left” even as it endorses her.

If we were seeing today the Chris Quinn that we saw a few years ago, this would be a more enthusiastic endorsement. As speaker, Quinn often showed courage and responsibility by siding with Mayor Bloomberg, as well as by opposing the dangerous proposals of her far more radical council members. Ever since her mayoral campaign kicked in, however, she has lurched hard to the left, embracing the kind of ridiculous nostrums for which she had previously shown considerable and rightful contempt.

A perfect example: the ill-advised mandatory paid sick-leave bill, which for years she courageously refused to bring to a council vote, only to reverse herself last spring when she was sharply criticized by her mayoral opponents and the unions. Similarly, she first declared unconditionally she would retain Ray Kelly as police commissioner. Then she made her proposal for an NYPD inspector general, a new and unnecessary layer of oversight. That turned the race into a referendum on the police, and stop-and-frisk came under withering political attack. Hard to imagine Ray Kelly would take her up on the job offer now.

The primary is two weeks from tomorrow.

Previous Bishop Of Honolulu: Gay Marriage Will Force Normal People To Be Re-Educated
Next Rudy Giuilani For Joe Lhota