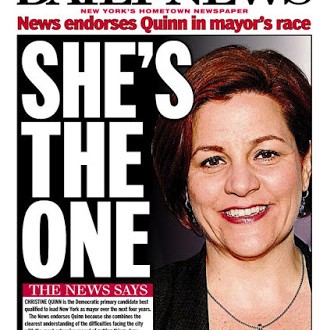 The New York Daily News has endorsed Christine Quinn by calling her the right person to continue the Bloomberg era. Which is pretty much what her detractors have been warning about.

The Bloomberg era will end with crime lower than it has ever been, employment at a record level, neighborhoods reborn, the schools rescued from a culture of failure and an economy enlivened by cutting-edge high-tech enterprises. The streets are clean, the parks are in good shape and New Yorkers are living to riper, older ages. Like Bloomberg or not, the gains have been real and, because they have been sustained, they are far too easily taken for granted. Allow crime to rise and the party’s over. Let up on demanding achievement from the schools and they will quickly surrender hard-fought progress. Against this backdrop, the Daily News measured the backgrounds and promises of each contender by the standards of pragmatism, realism and effectiveness: Council Speaker Christine Quinn is the Democratic primary candidate best qualified to lead New York as mayor over the next four years.

New York’s other major newspapers have not yet made endorsements.