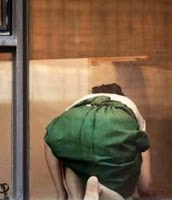 Back in the spring, I mentioned that residents of a luxury Tribeca building were seething about an art gallery’s exhibition of photos taken of them with a telephoto lens from an apartment across the street.  Yesterday a state judge dismissed the lawsuit filed by the building’s tenants, two of whom claimed that their children’s faces were identifiable in the photos.

“An artist may create and sell a work of art that resembles an individual without his or her written consent,” Judge Rakower wrote in her decision, underscoring a central principle of the case. Under New York state law, it is illegal to use a person’s likeness for commercial purposes without written consent. But Judge Rakower rejected the Foster’s argument on the grounds that New York state civil rights laws “yield to an artist’s protections under the First Amendment under the circumstances presented here.” She also concluded that Svenson’s images were primarily works of art, not advertising or objects for commercial trade, so they weren’t in violation of state privacy laws. ”The value of artistic expression outweighs any sale that stems from the published photos,” she wrote in the ruling.

As the above-linked article notes, many New Yorkers were furious with the photographer and the gallery. Close the drapes, folks. Or leave them open and wait for your own gallery debut.

Previous Petition Of The Day
Next Linda Harvey: Non-Discrimination Laws Create Climate Of Suspicion And Revenge