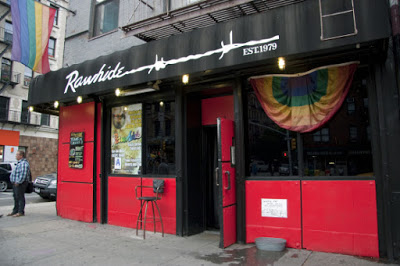 Back in March, I reported that Chelsea’s iconic Rawhide bar was closing after 34 years in business.  Jeremiah’s Vanishing New York reports on what is going in at that location:

Crain’s reports that Chelsea’s iconic gay leather bar is “being replaced by a West coast pizza chain, in another sign of the gentrification of the area around the popular High Line.” Project Pie is known as “the Chipotle of fast-casual pizza,” which means it’s a chain that models itself on another chain where your food is made on an assembly line. It [Rawhide] was the first gay bar in the neighborhood when it opened in 1979. It survived hatred and bricks through the windows. It survived the AIDS crisis and Giuliani. But it could not survive the High Line and Bloomberg’s New York. Then it was gone. The California pizza chain signed a 15-year lease for the space at $228 per square foot for 2,640 square feet. You do the math. That’s a lot of assembly line pizza.

Jeremiah wryly notes that the site’s landlord is claiming that Project Pie is going to bring “a little more local flair” to the neighborhood.

RELATED: Another iconic Chelsea landmark, Splash Bar, is closing next week after 22 years. Unconfirmed rumors on Facebook and elsewhere claim that Splash will relocate in Hell’s Kitchen, which has became the epicenter of Manhattan’s gay nightlife over the last few years.