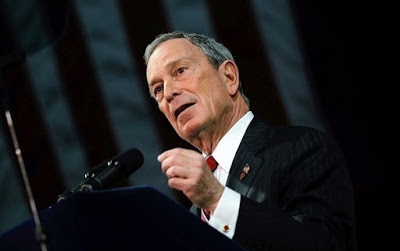 “What we really should have is fingerprinting to get in. And of course there’s an allegation that some of these apartments aren’t occupied by the people who originally have the lease,” said Mr. Bloomberg during his weekly radio sit-down with WOR’s John Gambling. The mayor noted that, while New York City Housing Authority building house about five percent of the city’s population, they account for about 20 percent of city crime. “We’ve just gotta find some ways to keep bringing crime down there,” he said, arguing that most people who live in the buildings want more police protection. “If you have a stranger walking in the halls of your apartment building, don’t you want somebody to stop and say, ‘Who are you? Why’re you here?’ Because the locks on these doors, with so many people coming and going, you really can’t,” he said.

Within an hour of Bloomberg’s radio appearance, the mayoral hopeful Bill Thompson derided the fingerprinting idea as “disrespectful” and “disgraceful.” “Just like stop-and-frisk, this is another direct act of treating minorities like criminals,” said Thompson, a former city comptroller, in a statement. “Mayor Bloomberg wants to make New Yorkers feel like prisoners in their own homes.” The public advocate Bill de Blasio, who is one of the front-runners in the mayoral race, called Bloomberg “out of touch” and urged the mayor to instead install security cameras within such public buildings, which house more than 400,000 people.

“It’s a completely ludicrous and outrageous notion that NYCHA residents and their guests should have to be fingerprinted to gain access to their own homes and to visit family and friends,” she said in a statement. “Rather than go after law abiding citizens who live in public housing, the City needs to provide residents with the security systems they have been promised for years.”

A spokesman for the mayor dismissed privacy concerns, because…iPhones.

“All security is moving towards biometrics – even the next iPhone will have fingerprint security. Every day the Mayor logs into his computer by placing his finger on the keyboard to login. Why wouldn’t we want to think about providing the highest level of security possible for NYCHA residents?” he asked via email. “You place the strongest security measures on things of most value – what is more valuable than their homes?”

RELATED: The city is about to retrofit 20 public housing towers with hotel-style key cards that will replace standard locks. That project is costing $11M.

Previous Gary Bauer: Judicial Terrorists On Supreme Court Are Outlawing The Bible
Next One Million Moms Vs Evolution