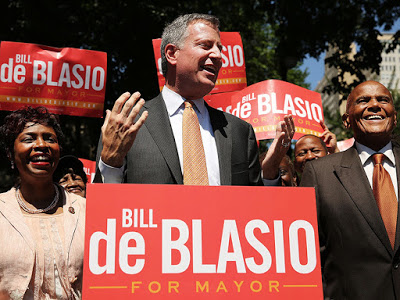 The New York Times has the story:

In a jolt to the Democratic campaign for mayor, a new poll suggests that Bill de Blasio, the most liberal of the leading candidates, has vaulted into first place among likely voters. The new Quinnipiac University survey of 579 likely Democratic voters in the Sept. 10 primary found Mr. de Blasio, who has been an outspoken critic of Mayor Michael R. Bloomberg on policing and other issues, with the support of 30 percent of voters. Ms. Quinn had 24 percent, Mr. Thompson 22 percent, and Mr. Weiner was down to 10 percent.

A spokesperson for the polling company cautioned that the rankings may change again as some of the candidates (including De Blasio) have only just launched their television commercials.  Christine Quinn’s ads have been running all summer.  In order to avoid a two-candidate runoff, the leading finisher in the primary must take at least 40% of the vote. That’s not likely to happen.