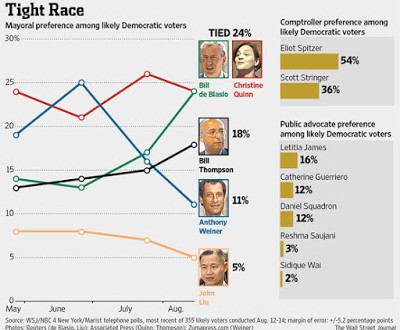 With nine candidates on the Democratic primary ballot, there is next to no chance anyone will win the contest outright, and so the top candidates have focused their efforts on securing a spot in the runoff. While Ms. Quinn has spent most of the race as the front-runner, the poll showed she will be the underdog in a runoff, Mr. Miringoff said. In a hypothetical face-off with Mr. de Blasio, he leads against Ms. Quinn 44% to 42% among registered democrats. If the runoff were between Mr. Thompson and Ms. Quinn, he leads 44% to 43%. Mr. de Blasio would also beat Mr. Thompson in a runoff, 44% to 36%, the poll showed. The margins in all three cases were slightly wider among likely voters.

The primary is in three weeks.