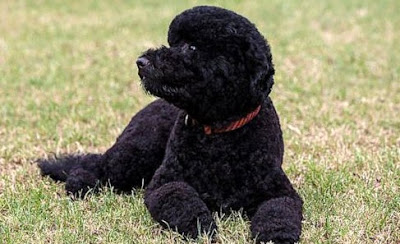 New Puppy For The Obama Family

This is how the story is told on the wingnut Daily Caller:

It’s a dog named “Sunny.” Apparently it’s a girl and it was born in 2012 in Michigan, where the unemployment rate was 8.8 percent last month. It is the Obamas’ second dog, after “Bo.” A Portuguese Water Dog can range in cost wildly. On average, one will pay between $1,400 and $2,000. President Barack Obama has this breed of animal, according to an answer on Ask.com. With the addition of Sunny, the Obamas now have two black Portuguese water dogs. The Obamas do not have any white dogs.

You cannot make it up, folks.