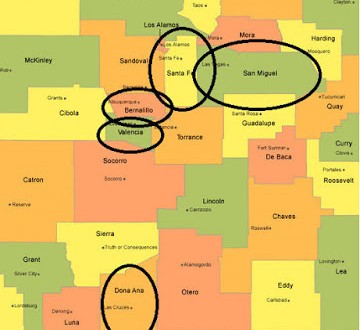 We’re up to five counties in New Mexico:

San Miguel County in New Mexico joins Valencia County as the latest in the state to issue marriage licenses to same-sex couples. San Miguel County Clerk Melanie Rivera has confirmed that she will issue new gender neutral marriage licenses later this week, though couples who don’t want to wait can receive a license today: Rivera also stated that couples who did not wish to wait could apply and receive a license today. Until the new licenses arrive Rivera will make the changes to the old forms by hand.

More than 100 people lined up in Albuquerque Tuesday morning as the clerk in New Mexico’s most populous county began issuing marriage licenses to gay and lesbian couples. The clerk opened her office to the excited crowd at 8 a.m., and a mass wedding was planned at noon in Albuquerque’s Civic Plaza. Patricia Catlett, a 61-year-old graphic designer from Albuquerque, and her partner of 25 years, Karen Schmiege, a 69-year-old retired librarian, were the first to get their license in Bernalillo County. “I am so excited, I can’t stand it,” Schmiege said as they signed their papers.

As the couple walked out of the booth where they received their license, the crowd applauded and cheered. The two raised their hands, and the crowd responded by putting their fists in the air. “I want her to take me to Costa Rica,” Schmiege said. “She promised.” Bernalillo County Clerk Maggie Toulouse Oliver began recognizing same-sex unions after State District Judge Alan Malott on Monday declared gay marriage legal, saying New Mexico’s constitution prohibits discrimination on the basis of sexual orientation.

Previous Pat Robertson: Gay Men Use Special Rings To Cut People And Give Them HIV
Next Cory Booker On Rumors That He’s Gay