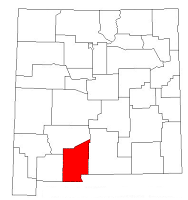 Same-sex couples in Doña Ana County began receiving marriage licenses this morning after the county clerk announced he was issuing them based on a legal opinion endorsed earlier this year by the City of Santa Fe and a recent filing by the attorney general stating that New Mexico’s laws demanded that the state issue licenses to same-sex couples. County Clerk Lynn Ellins began issuing the licenses at 8:00 am this morning from his office. At ProgressNowNM, we couldn’t be happier for the couples in Doña Ana County – and those across the state who will soon, no doubt, make their way there – who have waited far too long for public sentiment and political courage to evolve far enough to publicly acknowledge their relationships as being just as equal as that of their neighbors.

Progress Now will be posting photos to their Facebook page. (Tipped by JMG reader Elise)

UPDATE: The Las Cruces Sun-News has a quote from the county clerk.