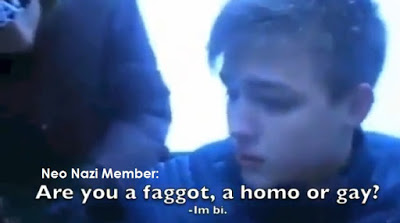 The Moscow Times has finally noticed the anti-gay vigilante groups whose videos have have been in the news elsewhere for months.  One of the groups they single out entraps teenage gay boys looking to hook up with older men and calls themselves Occupy Gerontophilia. (Gerontophilia means to have a sexual preference for the elderly.)

At least one official has drawn attention to the potential harm being done by the Occupy Gerontophilia group. Federation Council Senator Konstantin Dobrynin appealed to Investigative Committee head Alexander Bastrykin and Prosecutor General Yury Chaika over the matter earlier this month, saying a probe should be opened to determine whether the group’s leader and members could be held criminally liable for “coercion to perform acts of a sexual nature.” The charge carries a maximum sentence of five years in prison.

Social networking site Vkontakte has also been responsive to the increasing public outcry over the group’s activities, blocking its official page. And the group’s branch in Lipetsk recently attracted the attention of police, who last Thursday announced that they were looking into a video of a 17-year-old being taunted after agreeing to meet with a 22-year-old man.

But critics are wondering why it has taken authorities so long to respond, considering the group has been operating for nearly a year. Some say the belated response suggests that the official reaction isn’t sincere. “It’s pure PR,” former Pussy Riot lawyer Mark Feigin said by phone. “The fact that the perpetrators are minors makes it very difficult to prosecute them.” Feigin added that the criminal charge Dobrynin called for would likely not hold up in court.