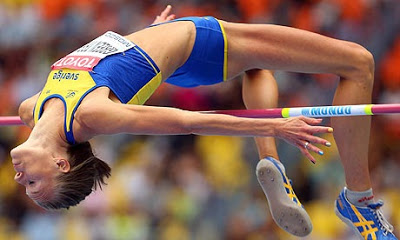 On Thursday, Swedish high jumper Emma Green Tregaro competed at the World Track & Field finals in Moscow with her fingernails painted in rainbow hues in support of the LGBT community. Her gesture sparked international headlines after she was denounced by the Russian pole vaulting world champion, who later backtracked.  Now comes this:

Swedish officials told the 28-year-old her rainbow gesture, which brought international attention as a protest against Russia’s new law against gay “propaganda,” could be a violation of the competition’s code of conduct. She said the Swedish track and field federation asked her to “please respect the rules” and change the colour of her nails. “So I decided to paint them red instead, for love,” she said. Green Tregaro said she was surprised the strong reaction to her subtle criticism of Russian law. “It was harder to not paint them in the rainbow than it was to choose to paint them,” she said.

Swedish officials say they were warned by the event’s governing body before they spoke to Tregaro.