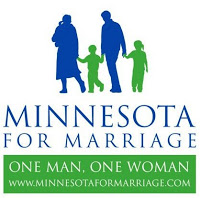 As same-sex marriages became legal in Minnesota, the anti-gay Minnesota For Marriage (home to Kalley Yanta) yesterday vowed that it will punish gay-friendly legislators during the 2014 election. With the financial help of NOM, of course.

Minnesota for Marriage said it will support lawmakers who took politically difficult votes against the gay marriage bill and encourage opposition to those who voted for it. Leva said it’s premature to say whether the goal will be to reverse the law. For now, she said, the idea is to help voters find lawmakers who share their values. “Minnesotans around the state have been asking ‘what’s next?’ after a group of legislators forced same-sex marriage on the state. The Marriage Majority Initiative will help them answer that question by restoring a pro-marriage majority in their state government,” John Helmberger, chairman of Minnesota for Marriage and CEO of the Minnesota Family Council, said in a statement.

Considering NOM’s super-shitty track record of “punishing” our allies, Minnesota’s pols probably don’t have much to worry about.