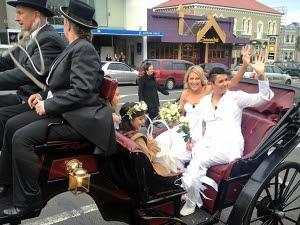 It’s Monday in New Zealand and the same-sex marriages have commenced.

The big day is here – it is now legal for same-sex couples to get married. And there are many lining up to finally tie the knot, with almost 1000 marriage forms downloaded, four couples racing to be the very first and 31 ceremonies around the country. One of the first same-sex couples to be married in New Zealand have arrived to a huge welcome at the Unitarian Church in Ponsonby this morning. Tash Vitali, 37, and Mel Ray, 29, arrived at the church about 8.15am where a large, colorful crowd had gathered. Reverend Dr Matt Tittle, who will conduct the ceremony, said it was an honour. “It’s history in the making and hopefully it will help other countries to do the same and help New Zealanders to realise that everyone has worth and dignity no matter who they love.”

Air New Zealand is celebrating the day with a special flight to feature “New Zealand’s first same-sex marriage in the skies.” On board is recently married actor Jesse Tyler Ferguson and his husband, Justin Mikita. Also on board is my pal and New Zealand Express editor Leif Wauters, who just posted a photo of his boarding pass.

New Zealand’s One News is running a live blog of today’s events.