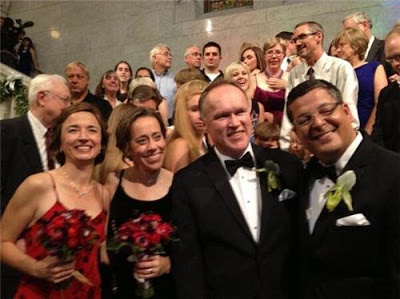 Shortly after midnight local time, dozens of gay couples were married tonight by the mayor of Minneapolis.

Clad in red and black gowns, Margaret Miles and Cathy ten Broeke stood facing each other, smiling through tears in the white-marbled, Minneapolis City Hall rotunda as the clock ticked toward midnight. Seconds later, Minneapolis Mayor R.T. Rybak declared: “Margaret and Cathy, by the power now finally vested in me, by the laws of the people of Minnesota, we hereby declare Margaret and Cathy legally married. You may now kiss the bride.”

The two kissed as hundreds of guests erupted in cheers and applause, amid a hall filled with fresh flowers, live music and cases of donated champagne. From Minneapolis and St. Paul to Duluth and Crookston, dozens of gay and lesbian couples tied the knot in the pre-dawn hours Thursday as Minnesota became the 13th state to legalize same-sex marriage. Couples and guests gathered in city halls, a conservatory, the Mall of America, even a bar to be among the first to usher in a new era of marriage equality in Minnesota.

“We are happy to recommit to one another every day, but the opportunity to be the symbol for the community is unequaled,” a beaming Miles said. The ceremonies across the state capped a polarizing and expensive political fight that settled the question of law while leaving Minnesotans still divided over same-sex marriage.

Check out the Star-Tribune for a live blog of the festivities.