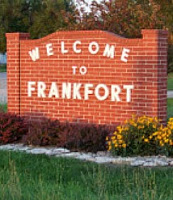 The good news just keeps coming today. In the capital of Kentucky:

The Frankfort City Commission Thursday morning finally passed an ordinance banning discrimination on the basis of sexual orientation and gender identity in the areas of housing, employment and public accommodations. At a specially called meeting, Mayor Bill May and commissioners Katie Hedden and Tommy Haynes voted in favor. Commissioner Robert Roach and Lynn Bowers dissented. The move makes Frankfort the fifth Kentucky city — alongside Louisville, Lexington, Covington and Vicco — with an ordinance protecting lesbians, gays, bisexuals and transgender people. The vote is the culmination of months of contentious debate both within the commission and the community. Because of amendments, the ordinance had three “first” readings before it received final approval Thursday. The issue was notable for its split of progressive and conservative religious leaders, particularly Baptist ministers, who often spoke at meetings.