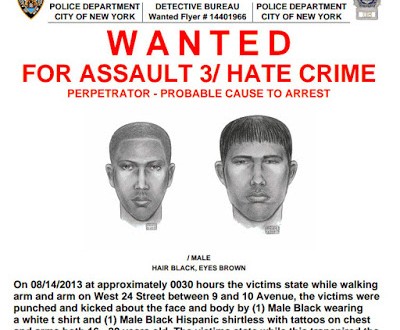 Just In From The NYPD

This kind of an anti-gay attack is unacceptable anywhere, but for it to happen in Chelsea which has such a large LGBT population is particularly shocking. And what’s worse is that this is happening after a summer of repeated attacks on members of the LGBT attack just because of who they are. People who commit hate crimes are cowards. This is not who we are. We are a city that knows that diversity is our greatest strength and we need to show that by helping the police by apprehending these attackers. We need to send a message that this type of hate crime is not acceptable, will not be tolerated, and needs to come to an end. We thank the NYPD’s Hate Crimes Task Force for taking immediate action to investigate this incident, and urge anyone with any more information on these sketches to contact the Crime Stoppers Hotline at 1-800-577-TIPS.