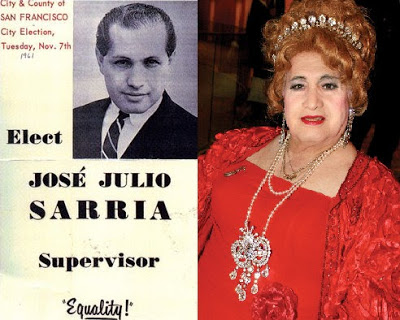 The legendary Jose Julio Sarria, also known as the Widow Norton and Empress I Jose, the founder of the International Court System and America’s first openly gay candidate for public office, has died at the age of 91. GLAAD has posted a remembrance:

One of America’s gay rights pioneering leaders, José Julio Sarria, passed away quietly in his home in New Mexico this morning. He was 91. Mr. Sarria was a proud World War II veteran and the very first openly gay candidate to run for public office in North America. He was a candidate for the San Francisco Board of Supervisors in 1961. Mr. Sarria’s candidacy was the start of true gay political power and gave voice to gay people who were tired of being treated like second class citizens. San Diego City Commissioner Nicole Murray Ramirez, a close friend of Mr. Sarria’s and a long time Latino Gay Activist stated “José Julio Sarria was indeed the Rosa Parks of the gay rights movement as an activist in the 1950s and 1960s.”

Since its founding, the Imperial Court System has raised millions for HIV/AIDS and other charities. More about its founding:

After his discharge from the Army, José became one of the most famous drag queen entertainers in San Francisco. Most notable were his one-person operas at the historic Black Cat Bar in the 1950s and 1960s. In 1965 Jose declared himself “Empress Jose I, The Widow Norton” after winning a drag queen competition at the Tavern Guild’s “Beaux Arts Ball”. Sarria took what had been a loose alliance of social groups and developed it into what now is the International Court System of the United States, Canada and Mexico with associated Chapters in over 68 cities across the three nations. “The Imperial Courts are like the gay Shriners/Elks of North America and have raised millions of dollars for charities these last 48 years, “stated City Commissioner Nicole Murray Ramirez who succeeded Sarria in 2007 as the International Chairperson of this fraternal LGBT charity organization. In 1961, Sarria helped to form the League for Civil Education, one of the first gay rights organizations in the country and the first gay non-profit registered in California. In 1963 he co-founded the Society for Individual Rights (SIR).

Sarria’s “Widow Norton” moniker came from Joshua Abraham Norton, a “famously eccentric” 19th century miner who had named himself to be the Emperor Of San Francisco. After declaring himself to be Norton’s widow, for 30 years Sarria led a procession of drag queens and followers to Norton’s gravesite. Read more about Sarria’s fascinating life here and here.

VIDEO: Here’s a 2010 clip of Sarria performing his trademark God Save Us Nelly Queens, which he famously performed at closing time at San Francisco’s Black Cat in the 1950s. Wikipedia adds: “Sometimes he would bring the crowd outside to sing the final verse to the men across the street in jail, who had been arrested in raids earlier in the night.”