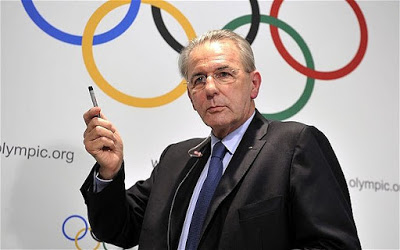 Today the head of the International Olympic Committee asked Russia for further clarity on whether the ban on “homosexual propaganda” will be enforced during the Sochi Olympics. Last week the IOC said it had received “assurances” from the Russian government that fans and athletes would be exempt from the law during the Games, but that claim was immediately shot down by some Russian legislators. Reuters reports:

Russia must explain how it will implement its controversial anti-gay propaganda law and detail its impact on next year’s Sochi Winter Games, Olympic president Jacques Rogge said on Friday. The International Olympic Committee want clarification of how the law will be applied, despite having received assurances from Games organisers, Rogge said. At a news conference in Moscow following a meeting between the International Association of Athletics Federations (IAAF) Council and the executive board of the IOC, and ahead of the start of the world athletics championships in the Russian capital on Saturday, Rogge said his body needed clarification over the English translation of the law.

“We have received all reassurances emanating from Mr Dmitry Kozak, who is in charge of the organisation of the Games in Sochi. We asked for written confirmation of these reassurances,” said Rogge, who was sitting alongside IAAF president Lamine Diack in the conference hall of the Radisson Royal hotel. “We received them yesterday, we have studied it this morning but there are still uncertainties and we have decided to ask for more clarification as of today. So we are waiting for this clarification before having final judgement on these reassurances.”

Rogge concluded: “The Games themselves should be open to all, free of discrimination. Our position is very clear but as we don’t have all (the) full details of a good comprehension of the law we cannot make any comment on that.”