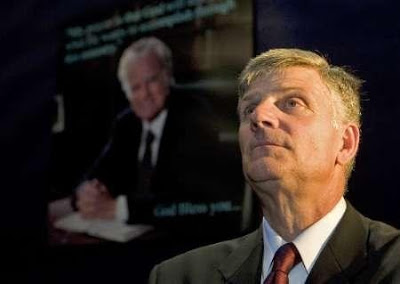 A lot of Icelanders were unhappy to hear that notoriously anti-gay evangelist Franklin Graham (son of Billy) was coming to speak at a religion conference. Here’s what they did about it:

Graham is set to appear Sept. 28-29 at the Festival of Hope, which he reportedly organized at the request of Icelandic churches. The event is free, but, according to the website, attendees may reserve as many as four tickets in advance. They may also make special requests for groups of 20 or more. Shortly after tickets became available Wednesday, users on Facebook, Twitter and Reddit began spreading the word that protesters were reserving seats for the event, but not planning to show up. Protesters say the goal is to leave the controversial Graham with an empty venue when he appears at Reykjavík’s Laugardalshöll arena next month. One Icelandic software developer, Elvar Thormar, wrote on Facebook that he’d reserved 500 tickets. According to the Icelandic ticketing website Midi.is, the event was already sold out Friday, when all available tickets had already been reserved.

You may recall that Graham was a vocal supporter of North Carolina’s Amendment One.